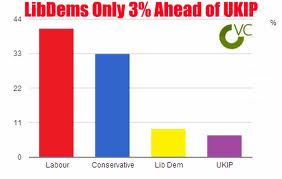 The poll, which puts UKIP on 7%, asked participants which party they would be most likely to support if a General Election was held tomorrow.


Labour scored 39%, Conservatives 33% and the Liberal Democrats 11%. The SNP polled 5% whilst the Green Party and the BNP were level at 2%.

UKIP Leader Nigel Farage said: "These figures show that UKIP is leaving the other smaller parties behind as more and more voters conclude that UKIP is the political party that is speaking their language on a number of important issues.


"I also believe that many are fed up of the same old faces and empty promises when it comes to so-called 'big three' parties and are looking for a credible alternative.

"Increasingly UKIP is becoming their party of choice."

This is great news for UKIP Bradford going in to the local elections next year - we are all set for some more record breaking results!


Posted by Jamie Illingworth at 11:49 No comments: