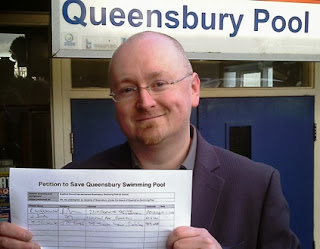 A £17 million plan from Bradford Council to replace local swimming pools in Queensbury, Bingley, Bowling and Richard Dunns Sports Centre with a city centre pool and other community swimming pools has come under attack from the local UK Independence Party.  The council states replacing "outdated pools" with new facilities would allow the council to increase income and reduce operating and maintenance costs.

UKIP Bradford has always supported the retention of local swimming pools as they believe these are important for the local community and especially children, UKIP are in favour of more local sports facilities rather than less and don’t support the Council’s strategy of centralising all leisure facilities.  UKIP is happy for the Council to build a new swimming pool but not at the expense of local swimming pools.  UKIP proposes instead to spend a small portion of the £17m to renovate the local pools; they propose to install solar panels on the renovated pools which will help to mitigate the energy costs of local pools which are a large portion of their operating costs.

Local UKIP Chairman Jason Smith launched a petition to ‘Save Queensbury Swimming Pool’ Saturday supported by local business and believes the majority of the residents of Queensbury will get behind it.
Mr Smith says: “Again we see an attack on our local services by Bradford Council, only they could propose spending £17 million to build new pools in order to save money.  If they had their way the outskirts of Bradford would be stripped of all their facilities to reallocate them to the Bradford city wasteland that they created.  This is another example of the council trying to paper over the craters of the city centre.

In UKIP we are proposing to use a portion of the money to instead renovate our local pools, use modern technology to cut down their operating costs and keep local service local.  We do not believe all decisions should be made on cost alone, we believe that resident’s standard of living and standards of local services are important too.

We will fight tooth and nail to protect our local pools and ask all local people to support us.”

A meeting of local Queensbury residents will be held on Thursday 23rd January at 7:30pm at Holy Trinity Church in Queensbury to discuss saving the local swimming pool.  All interested residents are invited to attend.