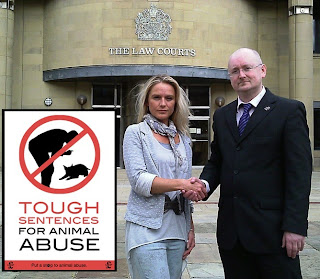 Zoe Kerr continues to fight for a justice with regard to the derisory sentence issued to Simon Tidswell for the murder of her two dogs Frank and Macey, initially denying the charge, Mr Tidwell then changed his plea which afforded him a lenient sentence. Miss Kerr and her supporters believes the laws on animal cruelty and sentencing must be changed to help deter people from perpetrating such crimes, they believe the sentences as they are now serve as no deterrent and make a mockery of the court system in relation to animal abuse.

Zoe Kerr has joined forces with a UKIP District Chairman and animal rights campaigner Jason Smith to put the issue of proper sentences for animal abuse on the political agenda.  Jason launched a UKIP district campaign Saturday for ‘Tough Sentences for Animal Abuse’, the campaign aims to raise awareness of issues of sentencing for animal abuse with the aim of bringing the debate to parliament.  Jason has launched a petition on the government website and hopes to gain the 100,000 signatures required to generate a debate in the House of Commons.

Jason Smith says: “I was horrified after seeing the pitiful sentence passed down for the murder of Zoe’s two dogs, as an animal rights campaigner I offered my support to Miss Kerr and will work to help her receive justice on this tragic event.

At the same time I will work towards gaining the 100,000 signatures required to have the issue of sentencing for animal abuse debated in parliament. I personally believe animal murders of this kind should receive a jail sentence; I would like government to set proper guidelines as we need to ensure sentences for animal abuse are a proper deterrent.”

Zoe Kerr says: “Not only did I lose my beautiful dogs in such a horrific way and will never get over it, I have been completely let down by our justice system and the criminal has worked the system to his advantage.

Animal abusers must have a sentence that reflects the severity of their crimes and the impact they have on the victims, my dogs were my family, I have lost my family.  The criminal has not been punished and our justice system has let me the victim down, this needs to change, the laws need to change.”

Anybody who supports this campaign should sign the below petitions and distribute to family and friends: