A breakdown of the EU results has been posted on the Guardian website, listing results by local authority.

UKIP are polling 3rd in Bradford!

To say we don't have any councillors or MPs in the area, it shows that there are plenty of voters willing to vote for us. All we have to do is go out and get them!

UKIP Come 2nd Nationally and Advance to 3rd in Yorkshire! 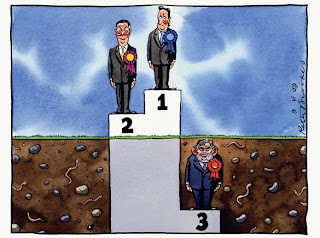 Well it was a very good night for UKIP, beating Labour into 3rd place and picking up new MEPs in Wales and the West Midlands.

Congratulations to the UKIP national, regional and local teams in rallying such good support and taking one further step towards UK Independence.

Now the long hard work starts towards the local and general elections!

Well we had a massive boost to the EU election campaign after holding two stalls in Halifax and Bradford. We handed out thousands of leaflets and got a really good response from the public.

People took leaflets, stickers and policy booklets. Everybody was annoyed with the major parties and were pleased to see us out and about actually talking to people.

The Greens and NO2EU also had stalls when we were there in Halifax, but we were the only ones that stayed all day!

Interesting to see none of the main parties dared to show their face the weekend before the election. If they had, I think they would have been lynched....